We Provide Each Patient With The Highest Possible Level Of Care

Pediatric urology is the sub-speciality of urology which involves the management of genital and urinary problems that occur in children, with a special emphasis on developmental (congenital) problems affecting the kidneys, bladder, urethra or genital tract.

Hydronephrosis (swelling of the kidney) and PUJO (pelviureteric junction obstruction) is common problem in children. Antenatal scan of the mother shows hydronephrosis in about 20% of fetus however many of these will resolve with time. In all children who had fetal hydronephrosis, an ultrasonogram is indicated after birth. Depending on the findings (anteroposterior diameter of the renal pelvis, presence of ureteric dilation) this may be followed up in some children by a nuclear scan at about 12 weeks. Some children will also need to undergo an X-ray called the micturating cystourethrogram to rule out reflux. Children with drop in kidney function or worsening hydronephrosis will require surgical correction for PUJO called a pyeloplasty. This can be avery well done laparoscopically in older children. Following surgery, hydronephrosis shows a gradual regression and the kidney function usually either stabilizes or improves in about 95% of children. Residual minimal swelling of kidney may persist but not to worry if child is asymptomatic and nuclear scan (DTPA renogram) shows good drainage.

Hydroureteronephrosis (swelling of kidney and ureter) due to VUR is a relatively common congenital (since birth) problem affecting children. It is characterized by a back flow (reflux) of urine from the bladder into the ureter & kidney at the time of passing urine. Normally this is prevented by a natural valve mechanism at the junction of the ureter and bladder. VUR can predispose to urinary infections and is associated in some children with bladder function abnormalities (which might prolong the reflux). Some children can develop long term kidney function problems (reflux nephropathy). Spontaneous resolution is seen usually in majority of children with low grade (upto grade III) reflux. It can be treated conservatively in children without kidney damage (scars seen on nuclear scan, DMSA scan) & in children with lower grade reflux (upto grades III). When the reflux fails to resolve, or if there are recurrent infections or anatomical bladder findings (paraureteral diverticulum) if the kidney shows damage, then a ureteric reimplantation is recommended.

The term megaureter defined as dilatation of the ureter irrespective of cause with a ureter that has a diameter of 7 mm or greater in general. The cause of megaureter is either primary, representing a condition of the ureter itself, or secondary to bladder pathologic processes, such as neurogenic bladder dysfunction, bladder outlet obstruction (PUV, posterior urethral valve), and/or infection. Megaureters can of four types based on cause; obstructive, refluxing, nonobstructed nonrefluxing, and refluxing with obstruction. Treatment is based on the cause and may require a ureteric reimplantation. This may be performed by open surgery or, in older children, by laparoscopy.

The most common anatomic obstruction of the bladder in the pediatric population is posterior urethral valves (PUVs). Reflux is present in 48% to 70% of patients with PUV patients. Relief of PUV obstruction appears responsible for resolution of reflux in about one third of the patients. In 70 – 80 % of children, reflux resolves within 6 months of valve ablation, considered as secondary reflux as a result of elevated voiding pressure. 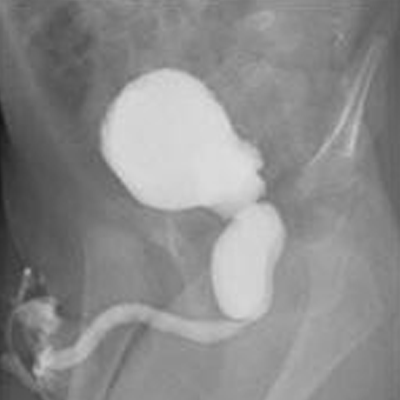